Digital advertising expenditure worldwide that include computers as well as mobile devices such as smart phones and tablet stand at an estimate of $194.6 billion in 2016. This estimated figure is predicted to constantly increase in years to come, reaching almost total of $ 335 billion by 2020. The mobile device advertising platform is one of the heavily invested sectors in digital advertising industry. The mobile internet platform is predicted to increase from an estimate of $ 109 billion in 2016 to well over $247 billion in 2020. Mobile ad spending in the U.S. alone is projected to double between 2015 and 2019. 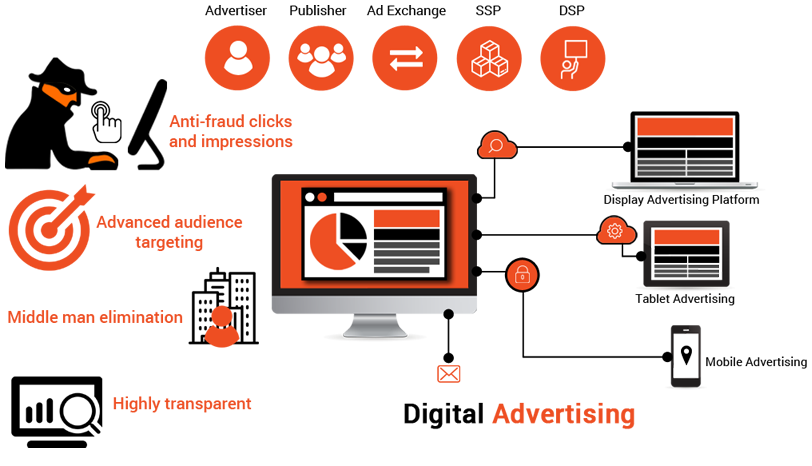 Blockchain shows potential and promises to resolve the said drawbacks or shortcomings in the digital advertising arena. Blockchain brings it’s attributes of Transparency, Security, Immutability and integrates with advertising platform. These attributes are accepted and adopted in the Ad tech fraternity as transparency is one such aspect which seems to lack in the industry. Most of the process and workflow are very much opaque to both the advertisers and the publishers who deliver these advertisements to the end users. Middlemen such as ad exchanges and ad agencies too, feel the grunt as the system is outdated.

When Publishers remove middlemen from the equation, they increase their CPM from five times. Blockchain can eventually shake the world advertising market and companies can pay their targeted audience directly to view their ads making the ad buy process extinct all- together. By using cryptocurrencies and tokens, companies will vie for actual audience attention not just impressions. Companies would be able to prove they’ve gotten that attention before the currency is exchanged. This would mean smarter spending and connecting with potential customers.

Both advertisers/marketers and the ad platforms they work together finding different methods in acquiring data aimed at enabling them deliver the right ad to the right user at the right time. Blockchain concept implementations and blockchain-based ad plays bet they can do far better considering the current scenario. As the system becomes more decentralized and distributes the different levels of data becomes more transparent and accessible for better and strategic targeting. As blockchain is immutable, the falsification of data is completely obsolete and the non-potential users viewing the ads over and over can be resolved. This means it would be much easier for advertisers to narrow down on their actual and intended potential customers.

Fraud clicks and impressions have taunted the digital advertising industry for years now. Both the sides in advertising take the hit. Billions of dollars are wasted or leak to unethical practices by third party. This would directly affect the advertiser’s campaign budget as the Return on Investment takes a serious hit. Also with the inconsistent data recorded would result in problems when formulating marketing strategies. As mentioned earlier Blockchain elimination of middle man would solve a considerable amount of fraud clicks from happening.

One of the main reasons for this to thrive is the opaqueness of the current advertising systems. By bringing in Blockchain advertisers can create a enhanced and robust verification offering. Advertisers can create a set of interoperable open protocols built on a immutable blockchain platform of their choice. They can maintain and store infinite records of publisher domain names accredited as not fraudulent.

Monetizing your personal data at your will