Agriculture accounts for a whopping $5 trillion global industry that is only getting bigger with the demand for the growth is increasing by the hour. It is one of the oldest and the most predominant industry in the world. It has been fuelling the population of the earth for centuries now. But off late there have been numerous concerns of how the industry would be able to sustain and provide considering the challenges faced at this day and age. If current trends of population growth rate continue, then by 2050 the caloric demand of the people will increase by 70 percent, and crop demand for human consumption and animal feeds would also increase by at least 100 % minimum. However meeting the exceeding expectations is not an easy process, like almost 30 % of the arable land has already been commercialised and disappeared. 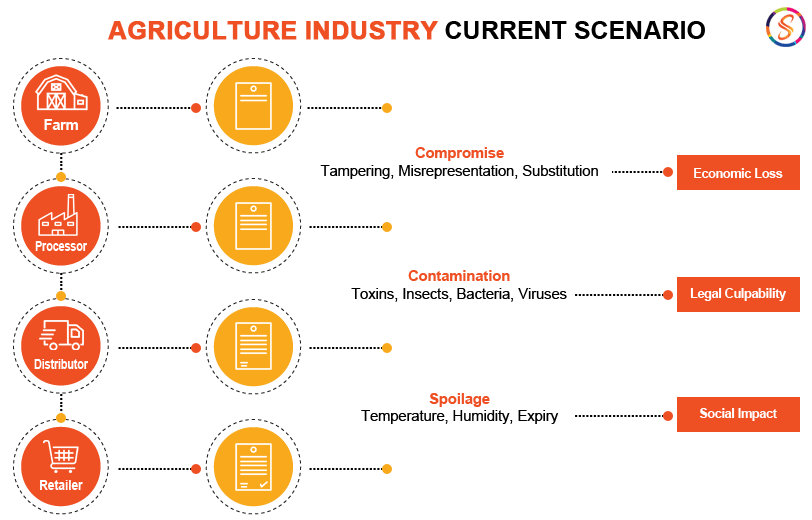 The global agriculture market is venturing out to look for solutions in the technology realm and the world economies growing robustly and will continue to increase the existing demand for agricultural products. Non-OECD countries are seeing most of the growth where increasing per capita incomes lead to a movement away from staple diets such as rice to more diverse, higher calorie diets which include fruits, vegetables and meat. Also the factor that developing countries’ population growth rate is twice that of the developed countries doesn’t help either.

What blockchain brings to the table? 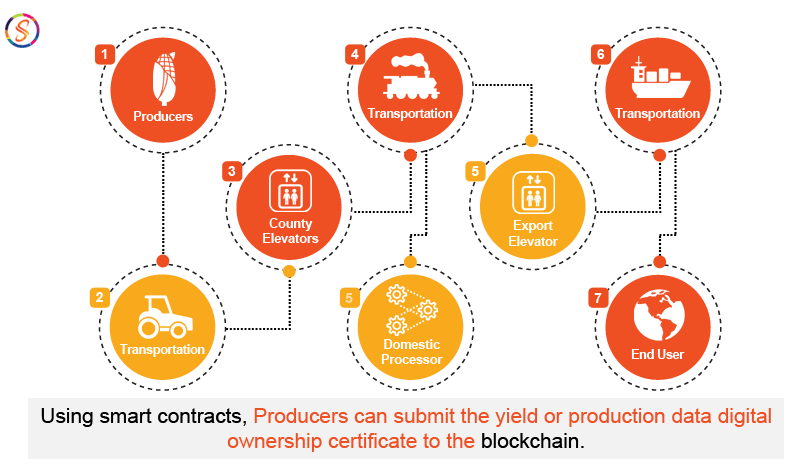 Blockchain, a decentralized or a distributed ledger that uses complex cryptography to conceal all and each of the entity block’s identity; with a closed chain of peer to peer network that brings together distributed time-stamping. In recent times it has made its mark in the fin tech sector by offering an immutable and public electronic ledger that can be used to store or record the complete history of financial transactions and decreases the possibility for any chance of data falsification in the future.

Blockchain stores them as a shared ledger; a public database that’s constantly refreshed and same across the network. The asset holders validate the transactions. Each transaction would be stored in a block. Each time a validator adds or removes a block, all the nodes in the system would be alerted. Here are a few highlights of bringing blockchain into an industry

Blockchain offers a 100% incorruptible resource. Its ‘digital ownership certificate’ will be data-specific and close to impossible to duplicate. All the data on activities during the crop yield and post the logistics and processing is duly recorded in an immutable block. There is no room for any kind of unaccounted fraudulent activities to go on.

With blockchain each of the process would have a digital identity. That includes the producer data, quantity of production, transportation details, warehousing data, commodity exchange rates and demand to supply analysis. Peer-to-peer transactions will remove any need for third-party verification, and hence intermediaries.

The blockchain is continuously supposed to self-audit every few minutes. And, it’ll be a repository of every kind of information. Since it’s decentralised, everything, right or fishy, will be visible to every transaction validator. The data from producer end to the consumer end would be transparent to all the intermediaries. With evidence distributed over the network, manipulating data without being noticed would be very unlikely.

4. Data security at its best

Any mismatching version will be caught instantly in a distributed database. That ensures data integrity. Decentralisation means that hackers will need to breach each node at once and compromise a significant part of the network to falsify even a single record.

Smart contracts, in theory, are built upon a set of constraints which, when fulfilled, will automatically release an action. With smart contracts, Producers can submit the yield or production data digital ownership certificate to the blockchain.

Blockchain and agriculture coming together


Looking for blockchain solution implementations?
Talk to Our Experts now on your requirements.