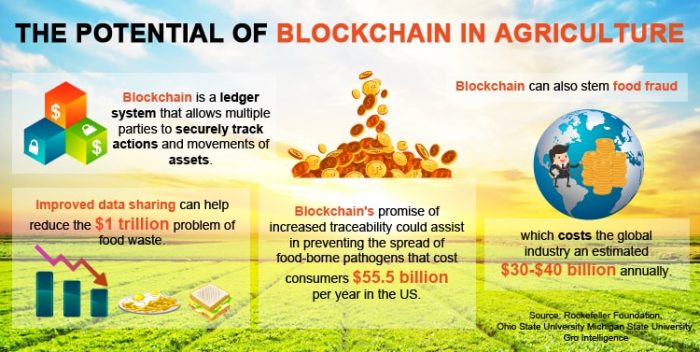 With the growing global population a big threat and the world economies growing robustly and will continue to increase the existing demand for agricultural products. Non-OECD countries are seeing most of the growth where increasing per capita incomes lead to a movement away from staple diets such as rice to more diverse, higher calorie diets which include fruits, vegetables and meat. Also the factor that developing countries’ population growth rate is twice that of the developed countries doesn’t help either.

Over the years with the evolution of technology has made its way into the agriculture industry from automation of processes to day to day aspects on streamlining the supply and hoarding process.

Though the existing technology seems to work to a particular extent, some issues still linger about in the sector. The producer or in this case the farmers are not fairly compensated for their yield. Most of the revenue is being eaten up by various levels of middle men. This is lose-lose situation for both the producer and the consumer. The consumer has to pay inflated price for the commodity which is worth much less and the producer gets only a bare minimum of the outcome he deserves. Also corporations who venture out and invest into this industry heavily rely on technology to streamline the whole process as some factors such as rain and climatic conditions don’t always favour the yield. 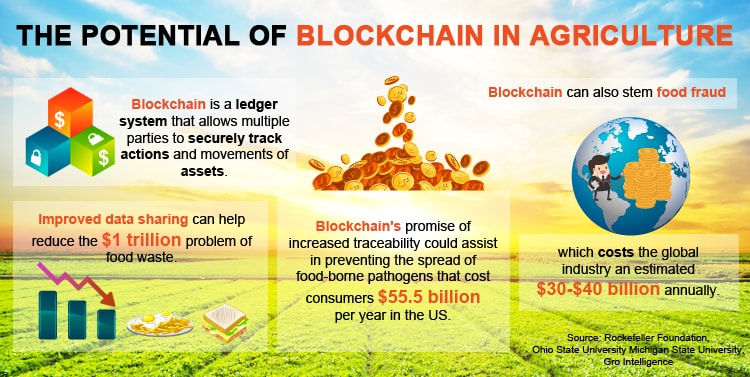 Every block in the blockchain would contain ordered sets of record or transaction along with a hash of the previous block. The initial block is referred to as the genesis block. This is key to blockchain security and guarantee of permanence since any change in the data of one block would affect all other blocks that follow. If in case a change was to take place it would require a new consensus process. All the blocks in the system form a chain together, this is collectively termed as blockchain.

Each block in the platform is replicated across all ‘nodes’ or computers in the peer to peer network of that blockchain. The absence or presence of any specific node would not affect the operation of blockchain as a whole. This would make sure it achieves the guaranteed uptime.

All transactions in a blockchain are cryptographically signed with public key cryptography to prove identity, authenticity and enforce read/write access rights. It becomes extremely difficult to crack these encryptions. This makes sure that complete anonymity of the party is maintained.

For a new set of transactions to be written to a block, the block must be validated by a consensus algorithm. Most common one being proof of work, where a node must solve a cryptographic puzzle thus entitling it to validate the new block. So in blockchain based on crypto-currencies, these miners earn a small coin. Though this seems all revolutionary, scalability has always been a big issue. Other consensus algorithms include BFT Byzantine-fault-tolerant replication and proof of stake.

Making the blockchain what it is today are Smart contracts. A blockchain should be a virtual machine, a distributed computer that could run simple programs, so-called ‘smart contracts’. This raises the prospect of writing autonomous pieces of software which run independently of human intervention.

Permission or non-permission protocol or ledgers

A fast-growing blockchain firm with expertise in delivering quality products, solutions, service and consulting in the tech side of things; Scala Blockchain looks to tread new roads with the prominence of Blockchain technology being optimistically possible. As the horizon of blockchain in various aspects of technology being explored, it is only imminent that businesses would indeed adapt and move toward blockchain base in the foreseeable future.