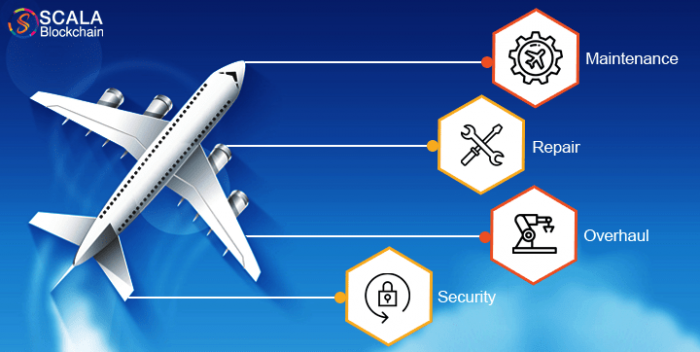 Airline industry being a multi-billion dollar giant it is, also a huge sector to adapt and embrace the blockchain revolution. Below elaborated are a few problems faced in the airlines industry and how blockchain technology could affect the future of the airline industry by providing solutions to these problems. It is fair to say that blockchain and other distributed ledger technology has the ability to improve security, improve trust and provide immutable record retention. It is not intended to be a list of all beneficial things, there are some areas which might become regulatory, which would need the airline to adapt to the new world and require some new approaches. Still the implementations of blockchain being explored, it goes without saying that blockchain might one day be induced into more applications in our daily lives

Considering the Aircraft transportation industry, the frequent and up to date service and maintenance of the in-use Air carriers. This is a serious concern to Airline companies as a tiny malfunction can pose a serious threat to the company’s reputation and sometimes could even result in the loss of lives. To avoid this Companies setup an exclusive department for the maintenance of the Carrier’s hardware and software. As most modern carriers heavily rely on software for anything and everything; this leaves the system vulnerable to cyber attacks. One small blunder and the outcome could be drastic and unpredictable. From take-off to landing there are different points of time where a preloaded software program is used in order to guide and support the pilot. Also, the airport operation needs to have a streamlined functionality in order to maintain the Air traffic data. Some of the problems are listed below

Although many new and established technologies have been implemented, there are leaps and bounds to improve. 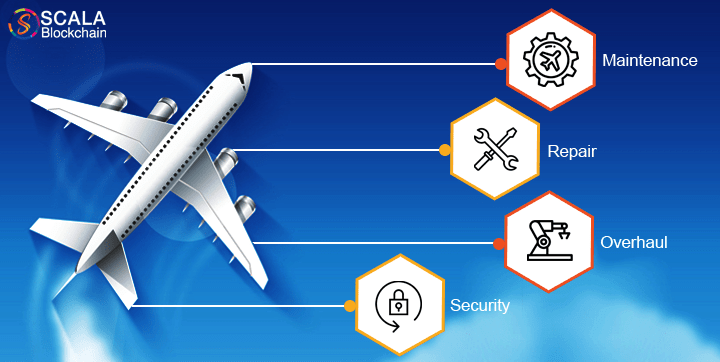 The possibility to tackle the above-mentioned problems in the airline industry is now possible thanks to Blockchain. Scala blockchain proposes a standard for maintaining the Maintenance, repairs, and overhauls of air carriers using blockchain technology.

The situation at airports is that there are lots of separate and untrusting parties coming together for the common goal of getting the aircraft landed, turned around and airborne again within the constraints of realistic turnaround times, weather events, and with safety above all. With so many institutions and systems jointly breaking down silos and sharing information has become a hot topic. This would be perfect ground for a consortium blockchain where each party would write to the chain and allow each party to see a true picture of what is happening in near real time at an airport. This would mean that decision making would not happen in isolation resulting in fewer delays and potentially highlighting areas which regularly cause delays.

A fast-growing blockchain firm with expertise in delivering quality products, solutions, service and consulting in the tech side of things; Scala Blockchain (www.scalablockchain.com) looks to tread new roads with the prominence of Blockchain technology being optimistically possible. As the horizon of blockchain in various aspects of technology being explored, it is only imminent that businesses would indeed adapt and move toward blockchain base in the foreseeable future.

2 thoughts on “Blockchain in Airline industry”