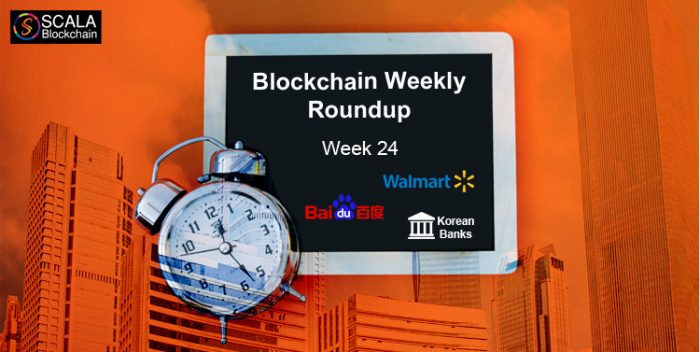 ScalaBlockchain, hereby, presents you the weekly roundup of news and events happened in the blockchain industry in the past week. This gives you an overall idea about what’s happening in the blockchain space and don’t want to miss-out an evolution. People who saw the potential of dot com are now Tech Giants. Blockchain may be another dot-com revolution. So, here’s what happened in the past week.

It seems china’s crackdown on cryptocurrencies just strengthens their view on blockchain. Baidu launched a Quiz app powered by blockchain technology. They are in compliance with the laws since blockchain has not been banned. The app started quiz activities and made it align with the football world cup opening mostly targeting football fans all over the world. China leads the most number of blockchain patents over the last consecutive years.

Replacing the 20-year old traditional customer ID verification systems which are both inefficient and complex, south Korean banks will start verifying customer ID with the help of blockchain technology. They are just a few weeks away from using the system in south Korean banks. Korea Federation of Banks revealed that they are going to use Nexledger, developed by Samsung SDS. The test phase which they’ve conducted on April this year was a success and they’re eventually rolling out in banks this July.

According to Greenwich Associates, banks spent a whopping 1.7 billion dollars on blockchain last year. This ensures the fact that they don’t want to be left out of the tremendous potential of blockchain in finance sector. This is a sign of them embracing the so-called revolutionary technology. The allocation of funds to Blockchain by financial sector has seen a 67% growth compared to the previous year.

Walmart is analyzing ways to fix with inefficiency with the energy being used by each household. With blockchain technology, the users can cap the cryptocurrency limit for the each appliance and hence strive for efficiency. The public ledger allows the users to control how much electricity to be allocated to each appliance. Walmart reportedly drafted and files patents for this last october. They also have plans for blockchain based shipping solutions to counter their rival Amazon. With small business to big corporates racing towards the blockchain only makes it stronger day by day. Remember how dot-com struggled in 2000s and made a huge comeback, blockchain may be next dot-com. So, what are you going to do with blockchain?