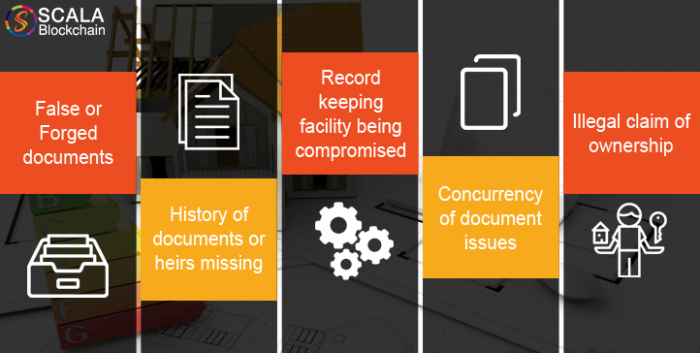 Real estate being an organized and streamlined sector in most countries is controlled by a central authority or a governing body. Real estate would include residential, commercial, natural reserves, government, and public property. Until the recent introduction of technology, all records were maintained in a hard copy. As everything has been digitized now the document, records and other data are stored in a centralized server. The buying or selling or transfer of ownership is recorded in public assets management systems.

Some of the major shortcomings are because of improper data maintenance methods in the past. With real estate taken into consideration, the history of the document for a particular land entity is very vital. Over the Years the data has been forged and has led to many concurrency issues. The way to authenticate the document in olden days was with the signatory process where the records are maintained in a public or a government-owned entity. The issue arises when the record keeping facility is compromised. Also, the ownership of a land is passed on over many generations and if should be made sure that the data is unaltered or manipulated. Illegal practices have thrived over the years some of them are 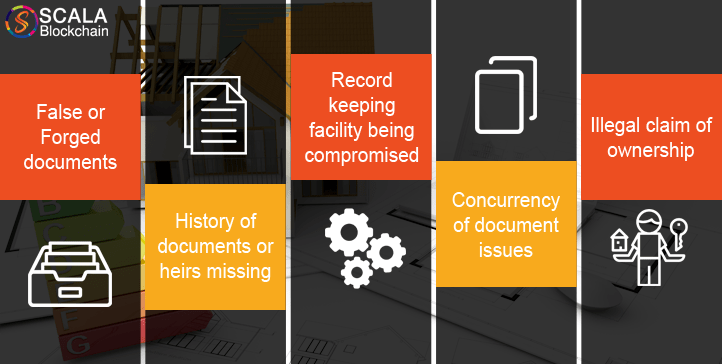 Though many measures are being taken to curtail the unethical activities in the field of real estate, somehow these occurrences find a way to by-pass the technology and the security. Many revolutionary technologies have been adopted to overcome these shortcomings. With the adoption and integration of Blockchain smart contracts into the real estate sector make possible a wide variety of implementation related flaws.

By using the most secure cryptographic ledger in the tech industry to ensure the security of all records and transaction-related documents and assets.

Some of these loans which are sanctioned against property can be of long term ones and sometimes the records maintained seem to be flawed in-case of the lien’s demise. By linking the lien’s data with the records it would make it easier for the authorities to be updated on the latest whereabouts.

Unethically creating a new identity and supporting document in order to overtake ownership of an unclaimed land is out of the question. As the data and records of the land is saved on a public ledger using blockchain technology.

An accurate history of heirs

On a person’s demise, the ownership of the property may fall to his heirs or those named as the rightful person within his will. But in some cases, these heirs are not known or not updated in the records properly. Other times, the family members may contest the will for their own property rights. This can be resolved easily with the blockchain implementation as the public individual identity would be linked in a family tree using a public distributed database.

Unethical access can pollute the property records with false documents and claims. The blockchain platform provides proof of history and a superior authentication that can’t be falsified or forged the reason being the blockchain with the advanced cryptography through the public distributed ledgers.