Governance is everything from administration to public services whether undertaken by a nation’s government, market or a network, either by a monarch, formal or informal alliance with help of laws, authority or power of any organized society. The processes of interaction and decision-making among the parties involved in a collective problem that lead to the creation, reinforcement, or reproduction of social norms and institutions. In lay terms, it could be described as the political processes that exist in between formal institutions.

A variety of entities can govern a particular region. The most formal is a government, a body whose sole responsibility and authority is to make binding decisions in a particular geopolitical system such as a state by establishing laws and enforcements. Other types of governing include an organization such as a corporation or a party recognized as a legal entity by a government, a socio-political group or another, informal group of people.

Also the current scenario of selecting human resource to operate and administer the so called government is done through an age old process of voting. But the voting system is flawed or rigged. As many unethical activities can be done to favor the election to a particular party. In most developed countries, the ballot system is used while in other they apply a digital aid to support in the process. Which makes it even more vulnerable and prone to falsification and forging; Governments are looking to adapt technologies that are no longer obsolete but immutable and highly secure. This is where blockchain technology pitches in. 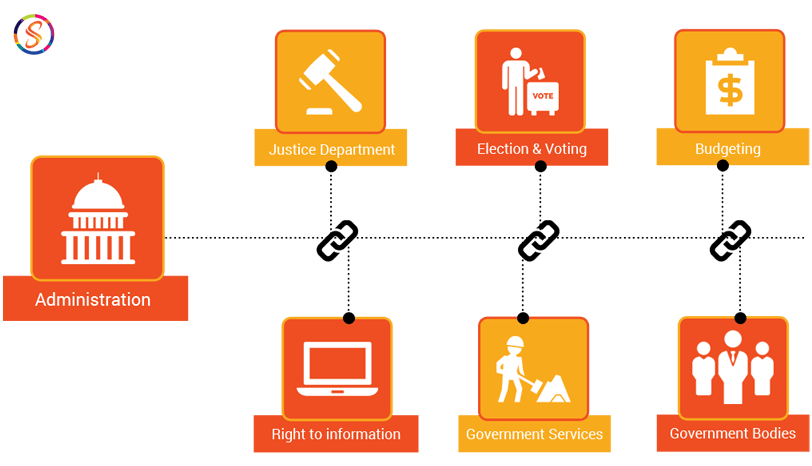 ​ Many government entities have started with the adoption of blockchain technology in the current administrative and political scenario. To create a sense of trust, many governments try to be as transparent, open and compatible as possible. Blockchain could be a key solution in achieving all of this. By demolishing bureaucracy, governments look to streamline their citizen interaction, all financial transaction and smart contract management. In a quite recent IBV Study “Building trust in government: Exploring the potential of blockchain for government” about 200 important leaders from as much as 16 different countries were surveyed on their experience and expectations from blockchain technology. The study revealed that blockchain technology provides the opportunity to face the trust and bureaucracy challenges head on. Researchers have found significant percentage of trailblazer governments are launching projects that apply blockchain to transform contract management, regulatory compliance, identity management and other citizen services.

Blockchain offers an entirely new approach in enhancing transparency, collaboration between all governments, business and their citizens. By registering assets and recording all ownership changes on an immutable distributed and shared ledger, the need for transparency and rights to privacy wouldn’t be at stake. Vital information can be shared seamlessly that encompasses openness. All transactions can be verified close to real time and can be combined with the extensive implication of privacy services and make fraud or cybercrime quite difficult. Smart contracts which once verified and deployed would execute. Forging a contract becomes a thing of the past. All this leads towards increasing transparency, building trust among citizens and increase accessibility between business, governments and their citizens.

Also rigging of elections would be a thing of the past as blockchain introduces new and improved ways and solution to make the elections and voting process more secure and concrete. Here are some key pointers on what blockchain brings to governance and voting.

Blockchain implementation in election and voting